Most Americans are increasingly moving toward a future with dismal savings. Part of the problem is many people live beyond their means, but that's merely a symptom of a bigger issue. The middle class is disappearing as incomes are stagnant while the cost of living rises. According to a new survey, many Americans are still struggling to save money.

A recent study of over 7,000 Americans conducted by GOBankingRates.com has found that 69% of respondents claimed to have less than $1,000 in savings. That's a 7% increase from a year ago in 2015. Just as alarming, the survey found that over a third of Americans have absolutely no savings at all, a year-to-year increase from 28 to 34%.

Baby boomers born before the mid-sixties are more likely to have a savings account, particularly those now 65 and over. Thirty-seven percent of this age group have at least $1,000 in savings. Yet only 27 percent of the age group 18-24 have achieved savings at this level. This data corresponds with a recent Ameritrade survey that found 9 out of 10 millennials admit to overspending, low savings or developing extra debt at least one month out of the year.

One reason millennials overspend is due to influence by their circle of friends. The Ameritrade study reveals that 52% of this age group say they overspend from frequently going out, while 46% are pressured by what they read from friends on social media. Older millennials 25-34, however, (about a third) have done a better job establishing savings.

The Best Ways to Building Your Savings 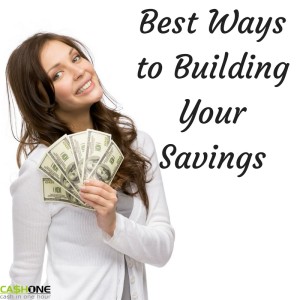 In order to build sufficient savings for at least emergencies, you need enough money in the bank to cover at least three to six months’ worth of expenses. Getting to that level requires a focus on getting out of debt and saving money so you can put enough money away each month as well as resistance to impulsive buying or burning too much money on entertainment.

Cutting expenses and saving money is very important, even with volatile energy prices. Follow these tips to get started on the path toward building your safety net:

You can strengthen your financial position even more by consulting a professional financial planner who can help you achieve your savings and retirement goals. Consider investing in financial planning tools as well, such as money management app Mint or Quicken software.